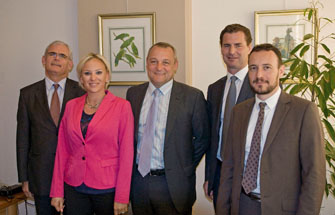 On the initiative of Mr Etienne FRANZI and with the support of Mr Jean CASTELLINI and the Financial Activities Supervisory Commission (Commission de Contrôle des Activités Financières, CCAF), the texts governing the mandatory professional certification system in the Principality were published in April. Interview with Mr Stent-Torriani, Vice-President of the AMAF and Chairman of the Finance Committee of the Strategic Attractiveness Council of Monaco.

What is the aim of this professional certification?

We had to work on the image of the financial market, for present and future clients alike. Some people thought the qualifications were not as good here as elsewhere - in London, for example. We had to quash that idea. Also, in July 2010 the French Financial Markets Authority, the AMF, introduced certification for investment professionals. We had to adapt to this change, not by copying the model but by doing something better. This is why the AMAF got together with the CCAF to develop this project.

Who are the people concerned?

Front Office staff, including compliance, and Back Office or Middle Office staff who wish to move to the Front Office. To give a fuller answer, managers, salespeople, financial analysts, trading room operators and their direct supervisors should all take the course and sit the certification exam. There is however a grandfather clause whereby people already doing the jobs concerned at the date of publication of the ministerial decree (12 April 2013) are exempted.

What does the training consist of?

It's a course of 44 hours overall, taught by the IUM (International University of Monaco) in collaboration with IntellEval Monaco, a centre of skills and expertise in the field of Compliance. 16 hours are devoted to deontology, and the rest is mainly technical training: macro-economics, specific financial tools, etc. - all at a very high level. It's important to stress the fact that this programme was developed jointly with the Monegasque regulator. The course concludes with an exam. The first session should begin early in 2014.

What happens if candidates fail?

They can resit the exam within twelve months. If they fail again they can of course work in a bank or management company in Monaco, but not in one of the positions we have mentioned.

What has been the reaction of professionals working in the financial market?

Very favourable. Like all of us, they are anxious to improve the image of the sector. Monaco is a very special place, and should represent excellence. Certification is one means to this end. It will in any case have positive repercussions on our clients and on business generated. And thanks to the participation of the AMAF the cost of the training is very reasonable: 1,150 euros per student. For an excellent course (IUM's Masters in Wealth Management is ranked 7th internationally) this is really not expensive. Those who benefit from it are very lucky; it's a way of raising their level of knowledge and skills.

So the first class will graduate in 2014?

We very much hope so. A fairly formal graduation ceremony is planned, in the presence of Jean Castellini, Government Counsellor for Finance and the Economy, and of course the heads of the AMAF and CCAF. It's important to possess skills, but also to make that known.