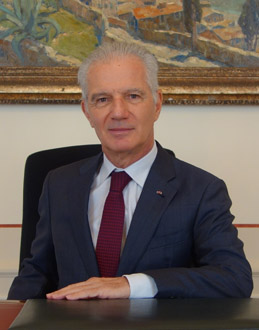 HE Claude Cottalorda, Monaco’s fifth Ambassador to France, is also Ambassador of the Principality of Monaco to the Principality of Andorra, and Personal Representative of HSH the Sovereign Prince and the Princely Government  to the Permanent Council of the Francophonie. After one year performing his duties, he tells us about his responsibilities and challenges.

How long has there been a Monegasque Embassy in France?

The Principality of Monaco and the French Republic have maintained diplomatic relations since 29 April 1873, the date of appointment by Sovereign Order of His Excellency the Marquis de Maussabré Beufvier as Extraordinary and Plenipotentiary Envoy of HSH the Sovereign Prince to the French Republic.

The diplomatic representation was constituted as a legation in 1890 and raised to embassy status in 1977.

His Excellency Christian Orsetti was the first Ambassador appointed to France and he holds the longevity record with almost 29 years of service. Conversely, the ambassador with the shortest term remained in office for just over 9 months.

How many people make up the Embassy today?

I rely on 4 diplomats and I have a staff of 15 locally recruited staff, ranging from the administrative head to secretaries, chauffeurs and the caretaker.

What are the responsibilities of Monaco’s Ambassador to France?

They are set out in article 3 of the Vienna Convention on Diplomatic Relations of 18 April 1961. The Ambassador must represent his country, protect its interests, negotiate with the host country’s government, learn about the host country, and foster friendly, economic and cultural relations.

The presence of an Ambassador in a country has always shown sovereignty. That is why the status of diplomats and the protocol surrounding diplomatic representation are so important. They indicate the country’s status and power.

Specifically regarding the responsibilities of the Monaco Ambassador to France, I would say that his role is primarily to maintain the excellent relations between our two countries. This is the main responsibility assigned to me by the Prince.

Is the representation duty important?

My role is obviously to represent the Principality of Monaco at all national events held in France, and on several occasions I have had the opportunity to meet the President of the Republic, the Prime Minister and several other French Ministers, particularly the Foreign Minister.

I also represent Monaco, either in person or through a diplomat, at the national holiday receptions of the various countries present in France. And I represent the Prince at award or honours ceremonies.

A Joint Commission on Franco-Monegasque Cooperation is held every year, alternately in Paris and Monaco, to negotiate matters of common interest. The French Ambassador to Monaco and I are members of the two delegations.

How does assistance to Monegasque nationals take shape?

In terms of assistance to Monegasque nationals in France, I provide them with my support for all administrative procedures, obtaining of visas, renewal of passports etc., and in emergencies of course. I thus had to manage an exceptional situation at the time of the tragic events of 13 November 2015, by emailing all Monegasques in Paris for whom I had an address and engaging with the French Foreign Ministry crisis unit. Fortunately none of my countrymen were victims of that barbaric act.

The diplomatic bag has always had a slightly caricatured image…
As you say, it is a caricature, especially with regard to relations between France and Monaco. There is no such ‘bag’. However, through the ‘diplomatic channels’ I relay the Monegasque authorities’ various requests to the French authorities by sending the Foreign Ministry ‘notes verbales’, such as for example visa applications, authorisations to carry a firearm for the persons responsible for protecting members of the Princely Family, sending in the riot squad to guarantee the safety of a ‘risky’ football match, and secondment of a police superintendent or a magistrate, judicial measures etc. Notes verbales are also relayed to other embassies in Paris.

I also assure the protection of the various consuls based in France (in Lyon, Marseille, Lille, Bordeaux, Strasbourg etc.), I chair the board of the Institut de Paléontologie Humaine and the Fondation de Monaco at the Cité Universitaire, a Bureau of International Expositions Commission and the representation of Monaco at the International Organisation of La Francophonie. A diplomat is also Vice Chairman at EUTELSAT general meetings.

Are there any events specific to the life of the Embassy in Paris intended to publicise the Principality of Monaco?

Yes, of course: greetings to the accredited diplomatic corps in Monaco, the annual reception organised in honour of the Sovereign Prince’s accession, dinners at the residence and lunches with members of diplomatic corps or Ministers.

A little-known point is the logistical support the Ambassador and Embassy provide to the Sovereign Prince when he is in France, whether for official visits or for events, as was the case for COP21 where all my diplomats were mobilised to take part in the negotiations.

What contacts do you have with the Ambassadors accredited in Monaco?

The work of the Ambassador to France is to represent the Prince and the Principality of Monaco on the world stage through the contacts I establish with other countries’ diplomatic representations, particularly during Ambassadors’ courtesy visits or working visits.

Another responsibility of the Ambassador in office in France is to be one of the ways of entry to Monaco for those countries with diplomatic representation in Paris.

Indeed, most accredited Ambassadors to Monaco are in office in Paris, and they use our proximity to request meetings and relay their requests to me.

And I relay messages which Heads of State send the Prince, as well as requests to establish diplomatic relations with a country.

The Embassy also examines applications for accreditation of new Ambassadors.

Lastly, I belong to the Groupe des Ambassadeurs Francophones de France (GAFF), of which I am the Treasurer. With this cohesive team of Ambassadors, we have already had the opportunity to organise working visits in several major regions of France (Rhône-Alpes-Auvergne, Pays de Loire etc.).

And the ‘challenges’ of the future?

The biggest challenge is managing to channel the actions the Head of State takes internationally to assert Monaco’s presence throughout the world, by constantly making known the Principality’s political, economic and social reality  in an attempt to erase persisting stereotypes.

To sum up, I would like to emphasise that in international fora each country has one vote, and that at voting time the voice of Monaco counts as much as any other country’s, including the largest.