The Edmond de Rothschild Group announces the nomination of Hervé Ordioni as CEO of International Private Banking and member of the Group Executive Committee as of 1 July 2022. Previously...

On Tuesday 14 June, the Association Monégasque des Activités Financières (AMAF) organised an ESG conference in the presence of the Minister of Finance and Economy, Mr Jean Castellini.

Jagdeep Kapoor: "My strategy has always been Sale and Leaseback”

Jagdeep Kapoor, Managing Director of Amberlake Partners, points out one of the differentiating factors of his company: investment products with commercial real estate as an underlying asset.

From Carbon Neutral to Nature Positive

As sustainable investing has gathered momentum over the last decade, much of the focus of the underlying investments has been on climate stability and, more specifically, carbon intensity. This makes... 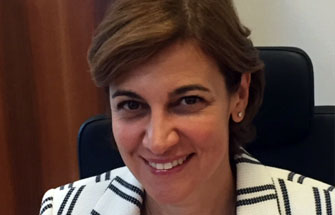 Magali Vercesi spent fourteen years in trading rooms as an dealer, and in risk control  associated with the transactions handled there. Thirteen years ago, she joined the government’s Ministry of Finance to check within the law 11.94 framework all activities subject to approval: management, advice, order transmission. Then, after managing the Office des Émissions de Timbres-Poste for 5 years, in May she joined the Financial Activities Supervisory Commission (CCAF) as Secretary General.

How would you describe the CCAF in Monaco?

We are a present regulator. This is facilitated by limited scope and control, given the number of financial institutions - which is large on our scale but low compared to countries such as France or England.
With the Monegasque Association of Financial Activities (AMAF) we form a real financial community that is in permanent contact. Banking institutions call on us regularly when they have a question related to their approval. I receive directors of international institutions who appreciate the availability of the regulator; this proximity relationship facilitates interpretation of the texts, improves the process and favours discourse.  We support them in their development.  If there are issues, which is rare, we take action. But we act in advance to the utmost.
We collaborate with the French Financial Markets Authority (AMF) and our control is largely at the international standards level.

Are the controls frequent?

When an institution is approved, the control is effected in the year after the implementation of its activity.
Then controls are carried out every three years. But their frequency also depends on what was noted during the previous control. We may judge that an earlier visit is necessary. Banking institutions and asset management companies are subject to the same frequency rules. We aim at prevention.

How are you organised?

The General Secretariat is the link between the commission and government.
My team comprises 2 controllers with banking profiles and trading room knowledge, a person dedicated to mutual funds, a lawyer who monitors all progressions of the applicable texts – or otherwise – in Monaco, an accountant tasked with analysing activity reports and statistics, and an assistant.

Do you work in tandem with your international counterparts?

Seven cooperation agreements are presently in place between Monaco and various countries: France with the AMF and the ACP, Italy, Luxembourg, Belgium, Germany and Holland, and in another perspective with the Service d'Information et de Contrôle sur les Circuits Financiers (SICCFIN) in Monaco.
The cooperation covers investigations concerning the stock markets.
The Commission is a member of the Institut Francophone de la Régulation Financière (IFREFI). Created in 2002, it aims to strengthen collaboration and exchanges on financial regulation between its members. 28 nations are represented and the institute meets yearly.
This is important as regulation is evolving constantly in Europe and throughout the world.  Monaco considers the opportuneness, or otherwise, of adapting to and joining these new developments.

Monaco has its specific features but it interacts with the international financial markets.  We need to find the right balance between the regulators’ requirements and the specific features of our market.  Regulation is now European and global and it affects interactions between banks. As for asset management companies, they manage foreign funds and also give advice. There is now constant exchange between all continents.
There is a trend towards standardisation of texts, and globalisation, with supranational bodies developing the regulations.

Can you say a little about the Monegasque financial centre?

The restructuring of the major bank groups may have an impact on Monaco - they are focusing on a number of activities and are selling others. When their Private Banking activities – the core business of the Principality of Monaco –are involved, there may be group buyouts. But the reorganisation is more that of the groups than the financial centre’s.