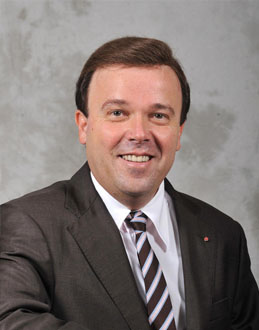 M.Stéphane Valéri (Government Advisor on Social Affairs and Health) spoke at the Meeting of the Members of AMAF (Association Monégasque des Activités Financières) on 5 June, at the invitation of its Chairman, M. Etienne Franzi. The subject of his speech: "How to ensure the future of a land of social solidarity".

By starting his speech with the strong statement "We are a socially developed country, a land of social solidarity, but nothing can ever be taken for granted", M. Stéphane Valéri hoped to highlight the need for constant reforms required to sustain the model that exists in Monaco. Some have been carried out; others are yet to come. However, the prerequisite conditions for changes are "a prosperous economy, companies for whom you provide all the means required for them to grow, in particular by allowing the heads of businesses flexibility in how they manage them. And also, of course, major projects".

The Advisor summarised the current state of social security schemes, following reforms that he described as being unavoidable. The alarm thresholds defined on a consensual basis relating to the size of the deficit had in effect been exceeded, with no hope of a reversal of the situation.  "The deficit had been growing for several years, and within thirty years we would have exhausted the reserve Funds. For example, and contrary to what some opponents of reform claimed when they said that the scheme would regain its natural balance, it should be explained that for the financial year 1 October 2012 to 30 October 2013, the deficit would have been 19.4M Euros and would have increased by an additional 5M Euros compared with the previous financial year. Besides, when considered logically, since the time period over which pensions would be paid is continually increasing due to longer life-spans, this would naturally lower the ratio of number of contributors/number of pensions paid. Therefore in order to preserve our redistributive, pay-as-you-go,  pension scheme it was absolutely necessary to introduce two major measures: a moderate increase in the level of employees' (+ 0.8%) and wage-earners' (+0.4%) contributions and the creation of a de-pegging rate of 1.1%. "
In effect, the redistributive pension system in Monaco operates on the basis of the annual issue of retirement points.  But as M. Valéri explained, "With entitlements provided by the scheme constantly increasing, the deficit was growing inexorably. The number of annual points acquired by a working person receiving an average salary de facto never ceased to increase.” The speaker described the details of the mechanism for this: "The mean hourly salary, he explained, was growing over a given period more rapidly (+1.1 point) than the basic salary used to determine the points acquisition value". The aim of the process known as dissociation is to put an end to the issue of an ever greater number of retirement points, by stabilising the latter, even if it's at its highest current level, explained M. Valéri, who is delighted at how quickly results were achieved.
The results are indeed positive: the deficit has decreased from 19.4M € to 2.2M €.  A balance has almost been reached. This was a necessary reform, and one which bore fruit.
Of course, this reform required everyone to accept responsibility. From an accounts viewpoint, although the excess cost of contribution is in fact limited to 0.8% for businesses - something that heads of businesses in other countries dream about - it should be remembered that we have simultaneously lowered "sickness" contributions by 0,3%.

Teleworking and the New Hospital

The Advisor on Social Affairs and Health is also involved in two ambitious projects: the introduction of Teleworking in the Principality, and the New Hospital.

Firstly, Teleworking will represent a major advance for the future development of the country's economy.
Two major bilateral agreements were signed with the French government on 18 March, relating to the introduction of teleworking for the Principality's organisations and employees. They define what teleworking is and specify details of how it can operate: By an exemption from European rules, teleworkers who reside in France can be subject to the social legislation of Monaco for the entire period during which they carry out telework for organisations based in Monaco. In more concrete terms, our businesses will have to pay employers' charges that are in force in Monaco, not those in France.

These agreements also establish the ways in which financial payments will operate in terms of sharing of health care costs of future retired teleworkers and their dependants: when they retire, they will, just like employees today, become affiliated to the French sickness insurance scheme, but up to 50% of the cost of their care with be met by funds in Monaco (on condition that the period of teleworking in Monaco is greater than or equal to 15 years).
Teleworkers must in addition spend at least one third of their time in their Monaco offices.  Although no geographical limits relating to the place of a teleworker's residence are envisaged, it is clear that this last clause should promote the application of the agreement mainly in Alpes-Maritimes.
The advantages? For France, the possible creation of thousands of jobs. There are numerous advantages for Monaco. First of all there is the reduction in road traffic and enhancement of the protection of the environment. But beyond this, it means preparing for the future of businesses, who will be able to grow whilst minimising their need for additional ground space.  "For them it's a genuine answer to the territory's lack of space, plus the possibility of reduced rental costs” explained M. Valéri. He also gave details of the advantages for the State in Monaco: growth in VAT receipts, more taxation on profits ('Impôt Sur les Bénéfices' - ISB) and new receipts for social security schemes. "Furthermore, employees will save time and money spent on travelling. They will benefit, quite simply, from a better quality of life" concluded M. Valéri, whilst clearly stating that "teleworking contracts will never be imposed, and the employee will be free to choose". The Economic and Social Council is currently being consulted, and will issue their opinion in June. The Draft legislation will then be submitted to the National Council for a vote which will take place when their schedule allows. In France, adoption of these new arrangements will require a vote on draft legislation for ratification by the French parliament.

The second major project for Monaco: the new Hospital.
Four years ago the first plans had been deemed to be too big, too expensive to build and with little rational thought put into its future operation. Nevertheless, a new institution was necessary. Consider, for example the ageing bungalow-like structures, the six separate operating theatres, which neither meet current standards for quality of care provided to patients, nor allow for good management, and therefore control of public expenditure.   Thus H.S.H the Sovereign Prince resolved the issue, by choosing this new plan.
To those who consider the cost of the project (about 660 million Euros at today's prices) to be excessive, Stéphane Valéri's response is that the new hospital will allow us to save a large proportion of the 30 million that the new French system for reimbursement of Social Security (T2A) will cost us each year, and the 10 million that keeping the current installation "up to standard" costs. These amounts would therefore be spent over the decades to come without the benefits of this remarkable new hospital, capable of providing health care based on the latest medical developments, high quality of work carried out by the care teams and designed to provide comfort for patients.  It should be remembered that only individual rooms will be available.
It will, of course, involve a long and complex project, due to the difficulties involved in undertaking construction on the same site without any disruption to the provision of care. In 2021 the first phase will ensure that essential hospitalisation services are provided. The benefits it will provide are obvious: a single operating block, better distribution of 400 beds with a reduction in the number of conventional surgical beds and an increase in the space and facilities given over to outpatients and day clinics. The quality of accommodation will be enhanced, not only with² individual rooms, but also VIP rooms in all departments.  The location, the architecture and the layout will also work together to maximise views over the sea, enhancing the comfort of accommodation for patients.  Finally the plans envisage the provision of over 650 parking spaces, including 290 from 2017 onwards. This high-quality hospital, which fully meets the needs of the community in Monaco, will also handle patients from Menton to Villefranche sur Mer.

Ambitious projects, therefore, that Stéphane Valéri seems particularly happy to support within the Royal Government, with, where the construction of the new Hospital is involved, his Resources colleague, Mme Marie-Pierre Gramaglia: "These projects illustrate our intention to ensure the future of a country of social solidarity. We will achieve our aims because we will provide the best possible conditions for carrying them out."