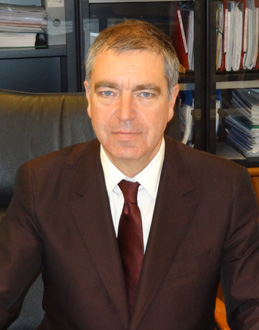 Robert Laure’s career began in Monaco in 1981, in the Banca Commerciale Italiana – taken over in 1996 by the CMB, which he has never left and is now Finance Director. He has headed ACI Monaco (Association Cambiste Internationale – the Financial Markets Association) for three years, having joined the association when it was first established over 20 years ago. He believes strongly in education and sharing, the two cornerstones of the ACI.

ACI Monaco was established 23 years ago…

Absolutely, under the aegis of ACI international, created in Paris in 1955. There was a dual objective then: to ensure that foreign exchange players  got to know one another, and to educate them regularly on the evolution of market practices; in a word train them.
Today, the ACI is a representative of the EBF (European Banking Federation). With over 12,000 members in 65 countries, the ACI is the only financial association exclusively made up of individuals. We shall formally welcome ACI USA to the next World Congress to be held in New York in September and thus complete our international expansion, already being present in Europe, Asia and Africa.
Our initial objective of meeting, and networking still stands, though the exchanges are now multiple and computerization has altered the nature of relations between foreign exchange players. As for education, that is necessary more than ever.

The profile of members has had to change

Indeed. ACI Monaco now has 70 members, the majority of whom are involved in varied financial activities and are less exclusively attached to the foreign exchange market. There are some foreign exchange brokers of course, but also portfolio managers. We now have more women members and younger members, which is a good thing. We perceive a growing interest in the association – it provides the opportunity for younger members to meet financial centre professionals. And the forums we organise are an attraction factor.

Are their themes varied?

For 22 years, we have organised an annual forum on a theme specifically oriented to the future. Last year we chose the continent of Africa and its particular asset classes. As it turns out Africa was in focus thereafter as a major investment market. We foresaw that. This year the theme will be «Bank  debt after the crisis: Basel III for new bullet-banks for investors».

And beyond the pun?

That is a fundamentally important subject. After the sub primes of summer 2007 and the financial crisis of 2008, two types of measures were adopted, aimed at control of the financial market and the banking system.  It was necessary to make sure that the financial markets were controllable, which led to a tightening up of  banking obligations as far as security is concerned. But beyond the measures taken regarding financial regulation (Dodd Frank Act, European Market Infrastructure Regulation etc.) and the development of the regulatory framework (AIFM directive on alternative funds management, MiFID directive on markets in financial instruments), we are witnessing a real paradigm shift. The actors’ responsibility is engaged, but in a different way. This is the subject we are going to develop.

It is absolutely necessary in our professions.  I am pleased to observe that different professionals from the world of finance take our training courses: brokers, administrative staff, back office staff. Our courses are free and the Lycée Technique et Hôtelier of Monaco - which I wish to thank - lends us its equipped-to-perfection auditorium. We allude to the money markets, the foreign exchange market, investments, derivatives, structured products etc. Our training courses are directly linked to the financial market and our trainers are practitioners who know the subjects they teach, beyond their theoretical aspects. Incidentally, I am pleased with the Professional Certification move made by the Financial Centre, which calls for a financial but also ethical  qualification. It recognises a level of knowledge and expertise that is absolutely necessary in a Financial Centre in evolution, such as ours.