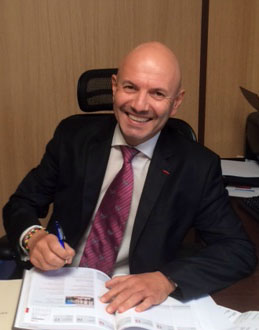 A graduate in Fundamental Public Law from Nice University, Laurent Anselmi, currently Chief Legal Advisor to the Government, has had a long law career: Minister, Secretary General of the Chancellerie des Ordres Princiers au Palais and, in a more recreational register,  Vice-President of the FIA international tribunal in Paris and President of the Commission de la langue monégasque. This devotee explains his mission to us.

What is the role of the Department of Legal Affairs in Monaco?

The Department of Legal Affairs is an executive department under the Constitution. That is to say it is under the direct authority of the Head of Government i.e. for Monaco the Minister of State. It should be understood that our department’s contribution is exclusively technical and legal. Political guidelines are conveyed to us by the Minister of State, in accordance with the instructions he receives from the Sovereign Prince. We are therefore the legal department of the executive.

How is the Department of Legal Affairs structured?

Currently this Department is composed of three different sections: the Legislative Affairs Section, Disputes Section, and International Law Section. Each section is under the responsibility of a section head.

The Legislative Affairs Section is responsible for the design of laws and regulations. It has expertise in that field. It ensures that proposals for legislation comply with the Constitution and respect the hierarchy of  norms, which on the basis of Constitution includes international law, treaty law and European law. It also works on the quality of these texts. Likewise for sovereign ordinances and ministerial orders. This body is also responsible for everything related to amendment of texts and analysis of bills from the National Council. We are indeed at the heart of negotiations between the Government and the Assembly.

The Disputes Section assures the defence and interest of the State in all its trials with private natural or legal persons, before all courts in Monaco and abroad. This section performs much legal consultation for the Minister of State and Government Ministers. It also assesses appeals from individuals and within that framework it can liaise with the High  Commissioner for the protection of rights.

Finally, the International Law Section was established much more recently. It assesses the scope of all treaties or agreements which the Principality of Monaco intends to ratify or sign, and on such topics it provides technical opinions for the Government. Its second mission is to ensure the defence of the State of Monaco before the European Court of Human Rights in Strasbourg. To date, the Principality of Monaco has never incurred a really important judgment.

What is the manpower of the Department of Legal Affairs?

The Department has over twenty people, of which all its executives are lawyers specialised in different areas. Constitutional law, administrative law, commercial law, criminal law, EU  law, and even law related to new technologies. Many of them are doctors in law and several have been  lawyers at the Bar of Paris or Nice.

Which projects are you working on at present?

We are very involved in laws originating in the wake of international agreements. For example, from 2014 to 2016, three have been signed on fiscal transparency. Another of our prime interests concerns the legal implications of new technologies. Lately we have been associated with the creation of Monaco Cyber Security Agency and the design of the bill on technological crime. This is now a vital topic, in terms of both cyber attacks and terrorism.

Monegasque law is not French law. What strategies do you have to make it better known?

Our department is actively working on what could be called public relations for Monegasque law.
In this mission we have the support of the publishing house we are working with for publication of the "Monegasque Code". I am co-writing this code with Jean-Pierre Gastaud, Professor of Business Law. This volume brings together the essence of the major Monegasque texts and is focused on explaining what distinguishes our law from the French system, by giving keys to the interpretation of that.
I also urge my staff to publish articles on their area in journals. I encourage them to be members of lawyers’ associations, again in accordance with their area. Moreover, I never refuse to speak at universities or professional meetings, as I believe it is essential to make oneself known.

The Department of Legal Affairs also oversees the senior committee on legal studies, a body established by Prince Rainier to have an external and collegial angle on some complex legal topics. Most members of this committee are law professors teaching in French universities or high-level practitioners. Therefore these people also spread the word about Monegasque law, which is another way for us to make ourselves known.