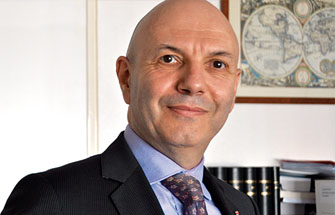 After highlighting the difficulty of defining the boundaries of financial crime (international capital movements, misappropriation of funds, tendering infringements etc.), Mr. Anselmi stressed the  variable nature of its purpose, as the illegal actions may be committed with a purely lucrative aim or they may constitute a means of financing a terrorist activity, for example.

He recalled that while Monaco has classical instruments for fighting financial crime, such as for fraud for example, resulting in particular from the criminal code, the past decades have seen some significant changes:

Mr Anselmi also noted that this legislative development has affected the country’s administrative and institutional landscape:

As for the repression of financial crime, the speaker examined the duality of the legal nature of the possible penalties, which may be administrative or criminal.

On the statistical front he stated that in Monaco 41% of criminal cases relate to economic and financial offences.

In conclusion, Mr Anselmi underlined that the continuous evolution of this type of crime justifies Monaco’s administrative and judicial authorities having the legal instruments to allow constant adaptation to illegal practices. For this purpose, he announced collaboration with the Law Faculty in Nice for detailed research on financial crime and Monegasque law.