Second National Money Laundering and Financing of Terrorist Financing Risk Assessment in View of the MONEYVAL Evaluation: A New Update

At the initiative of Mr. Michel Hunault, Director of SICCFIN and head of the Monegasque delegation to the MONEYVAL committee, an update on the work of Monaco's National Risk Assessment...

Hervé Ordioni : "Diligence in the face of changing standards and legislative adaptations is recognized in Monaco”

Hervé Ordioni, Managing Director of Banque Edmond de Rothschild in Monaco and Chairman of the "Promotion of the Monaco Financial Place" Commission of the Association Monégasque des Activités Financières (AMAF),...

The AMAF: passing on information provided by the CCIN

Mme Agnès LEPAULMIER is Secretary General of the CCIN (Commission de Contrôle des Informations Nominatives - the Monaco authority responsible for protecting personal data). We met with her because the...

Commission for the Control of Financial Activities: creating a more appealing industry through supervisory activity

The Commission for the Control of Financial Activities (CCAF) is responsible for overseeing the financial activities of the Monaco financial industry. Composed of at least seven members, chosen for their... 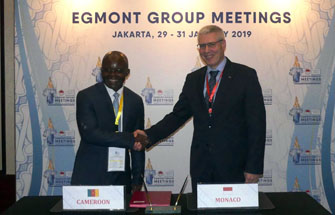 SICCFIN, the Principality's Financial Intelligence Unit (FIU), represented by Philippe Boisbouvier, Karine Imbert and Jenny Perrot, took part in an inter-sessional meeting of the EGMONT Group, held in Jakarta, Indonesia, from 29 to 31 January 2019.

The EGMONT Group is an international organisation that now includes 159 FIUs.  Its mission is to combat money laundering and the financing of terrorism (AML/CFT).
At this event, Philippe Boisbouvier signed four cooperation agreements with the following FIUs: ANIF - Cameroon, UAF - Chile, CVI – Guatemala and CENTIF - Benin.

These agreements, concluded on the basis of a model framework agreement validated by the EGMONT Group, aim to facilitate and strengthen the exchange of information between signatory countries, with a view to optimising investigations.  Their implementation is subject to various reciprocal guarantees.

During their trip to Jakarta, the members of the Monegasque delegation played an active role in the activities of several working groups, including the "Exchanges and Cooperation," "Assistance and Training" and "Procedures and Policies" groups.

Additionally, they had many fruitful discussions with members of other delegations.

Several contacts were also made in connection with the signature of new cooperation agreements at the 26th plenary meeting of the EGMONT Group, to be held at The Hague, in the Netherlands, in July 2019.