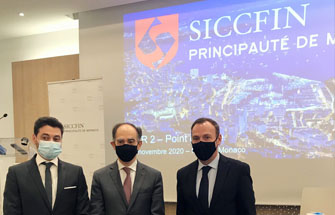 Last November, at the initiative of Mr. Michel HUNAULT, Director of SICCFIN (Service d'Information et de Contrôle sur les Circuits Financiers), a progress report on the National Risk Assessment (ENR) was organised, bringing together more than a hundred people. This extremely rare attendance during a pandemic* underlines the constructive links between SICCFIN and the representatives of the various professions, associations and foundations in Monaco and the strategic importance of this ENR.

"This milestone is an important chapter in the preparation of the MONEYVAL evaluation. The ENR was undertaken five years ago with the aim of identifying, assessing and understanding the potential or real risks facing the Principality", said Jean Castellini, Minister Counsellor for the Economy and Finance, in his introduction. Today, the second ENR is part of the Principality of Monaco's desire to adapt a legal framework for the fight against and prevention of LCB/FTC **. This framework is intended to comply with the best international standards.

What is the purpose of the ENR?

It makes it possible to assess the extent of the risks to which the Principality and its professionals are exposed, to evaluate the level of technical compliance of the Principality as a whole with regard to international standards, and thus to assess the system put in place.
Finally, this new ENR aims to demonstrate to the future assessors of the MONEYVAL Committee the Monegasque community's shared desire to make the LCB/FT, and more generally, the fight against financial crime a requirement, in line with the line set by H.S.H. Prince Albert, during his speech in July 2005.

What is it composed of?

An analysis of the threats facing the Principality, in order to assess and understand the risks of money laundering, terrorist financing and corruption.
An analysis of the vulnerabilities of all professions in the financial and non-financial sectors in order to assess the existing LCB/FTC system.
The methodology of this ENR was presented by Mr. Sébastien PRAT, from Phoenix consulting, who assists SICCFIN in the organisation and steering of the work to be carried out.

Targeting all of the new professions subject to regulation since the last update of the system and evoking new technologies (crypto-currency, blockchains) in the light of regulation are part of the imperatives of this new ENR, supported by two strong desires: that of significantly involving the professionals concerned in order to ensure the cohesion of the Monegasque financial centre and the understanding of the stakes of this project by all. And that of reinforcing the cooperation of all the administrative departments likely to apprehend the LCB/FT risk and, a fortiori, to prevent it.

Robert Gelli, Secretary of State, emphasised that the notion of effectiveness is in the line of sight: "setting up control mechanisms is not enough, it is important to prove their effectiveness through qualitative and quantitative statistics; this is where justice is an essential actor because in the end, controls result in court decisions. »

Concerning the banking sector Hervé Ordioni, President of the Commission for the Promotion of the Financial Centre of the AMAF (Monegasque Association of Financial Activities) concludes with a reassuring speech: "in 2007, during presentations of the financial centre abroad, 30% of the time was to be devoted to describing the regulations governing our activities. Today, our interlocutors have understood that we are in an extremely well-regulated environment, which is an absolute necessity. We have the know-how, the rigour and the ethics. All the banking establishments in the Principality, with one exception, are listed on the European market. It is impossible for them to take liberties in relation to directives emanating from their headquarters. In just a few years, our image has improved considerably, thanks in part to the respect for rules. This must continue. »

From left to right in the picture : M.PRAT / M.CASTELLINI / M.HUNAULT
* the most rigorous sanitary measures were implemented.
** Fight Against Money Laundering (LCB) / and against the Financing of Terrorism and Corruption (FT-C)