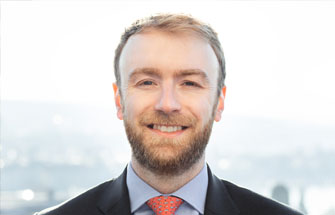 James Purcell, head of Sustainable and Impact Investing, recalls: “The original plan was simple: Find the world’s best biotech venture capitalist. Raise capital with the specific objective of curing cancers. And attach small charitable royalties to the drugs so that, if they became blockbusters, fundamental oncology research would receive a windfall that could fund further work into finding the next breakthrough.”

That was in 2016, when the UBS Oncology Impact Fund swayed clients into a USD 471 million investment. A "who's who" of private equity has since sought to deliver the double bottom line of returns and impact, and UBS Global Wealth Management has partnered with TPG Rise, KKR Impact, Generation III and other funds in these efforts. Client interest has continued to build, and such funds, with their laser focus on returns, enable them to support impactful companies while reaping competitive financial rewards.

The road to mainstream impact investing has not been a straight one. The term “impact” is still being used to describe investments that don't produce societal benefits. “So-called 'impact washing' – where a firm overstates the results of investing in a financial product – is a problem in the market," says Purcell. "Some firms prioritize marketing over real-world results.”

For example, a fund that buys the public stock of renewable energy companies while divesting itself of coal miner shares might sound as if it is making a solid environmental contribution. But the shares it bought or sold already existed so no capital was being given to, or taken away from, the companies involved. Private equity alters this equation. In growth deals, money is invested in “primary transactions” – i.e. additional funds create new shares to help fund company expansion.

Private equity is an asset class likely to appeal to those who want their investments to make a difference. By putting their money to work, investors can help launch the next generation of businesses that develop cancer drugs, or socially conscious fin-tech, or alternative proteins. They can monitor the concrete effects these companies have via metrics such as human lives saved or tons of carbon not added to the atmosphere.

To combat the threat of “impact washing,” the impact investing industry adopted the IFC’s Operating Principles for Impact Management in April. These nine principles cover everything from strategic intent through portfolio management to impact at exit to help distinguish investments that have a meaningful impact from those that do not. UBS Global Wealth Management served on the steering committee that drafted these principles, and UBS Group Chairman Axel Weber was a founding signatory at the World Bank Group / IFC Spring Meetings in Washington, D.C.

Purcell underlines the importance of this step forward: "To meet the world’s sustainability challenges we need to markedly increase impact investments. By credibly defining the terms, the IFC’s principles lay the groundwork for mobilizing impactful capital on a scale never seen before – and much of it will be raised via private equity.”