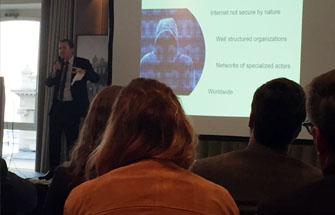 In October, Fintech KeeSystem organised a conference about the latest developments, exclusive solutions and innovations which have been specially created for Family Offices in Monaco.  Attending were Monaco's government advisor and minister of finance and economy, Jean Castellini, Alain Berthou of SIX, Alexandre Bayeux from Aturys and Pierre-Alexandre Rouselot of KeeSystem, who all shed light upon and gave clear information about this subject.

In the Principality, the regulatory framework for Single Family Offices (SFOs) is extremely effective and satisfactory, guaranteeing security and confidentiality.  The launch of a digital security office in Monaco, which takes into account every challenge faced in relation to IT security, is proof of this, as Jean Castellini has stressed.  Monaco is the ideal location for SFOs as all they have to do is make an application by submitting a dossier to the Economic Expansion Department.  When the documents have been examined and validated by the government committee, an SFO can be set up in accordance with the core company objectives of the dozens of companies already operating perfectly efficiently with these within the Principality.

What needs to be done now is to create a similar framework for Multi Family Offices (MFOs).  According to Thierry Crovetto, founder of TC Stratégie Financière, MFOs represent an interesting prospect and a suitable regulatory framework is due to be voted in at the autumn session of the Monaco National Council.  As Mr Crovetto says, “An MFO is a real point of co-ordination for the client, whether it be in large financial or non-financial operations, and there is no conflict of interest.  This is an attractive prospect within the Principality. Residents currently only pay us 10% of their deposits, so this could evolve rapidly with MFOs.”