On Monday 19th July 2021, in the Grand Hall of the Ministry of State, Mr Patrice CELLARIO, Government Councillor-Minister of the Interior and Mr Etienne FRANZI, President of the Association... 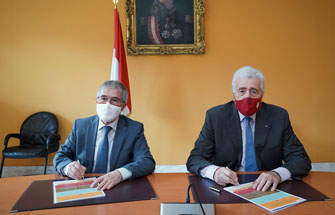 On Monday 19th July 2021, in the Grand Hall of the Ministry of State, Mr Patrice CELLARIO, Government Councillor-Minister of the Interior and Mr Etienne FRANZI, President of the Association Monégasque des Activités Financières (AMAF), formalised the creation of the Vigibanque Committee, reinforcing the already long-standing partnership between the 30 Monegasque banks and the Public Security.

This cooperation agreement between the banking sector and Public Security will add to the three committees already created as part of the "Monaco a Safe City" project (Monaco Luxury Security Committee in 2018, Hotel and Private Security Companies Committees in 2020). Thus, four sectors considered as sensitive by Mr. Richard MARANGONI, Controller General in charge of the Public Safety Department, will benefit from this unique partnership in Europe.

The "Monaco a Safe City" project, led by Commissioner HAGET, already brings together several hundred Monegasque professionals who actively participate in the Principality's overall security, through their adherence to charters of good professional practice, and who benefit from the operational support of Public Security (training, alert dissemination, security audits, crisis planning advice, etc.).

The creation of this 4th Committee is the result of the work of a working group between the security referents of several banks, the Secretary General of the AMAF, Mr Iozia, and the Monegasque police.

In addition to the need to maintain and perpetuate the very high level of physical security in banks, this working group drew up a charter of good professional practices, "VIGIBANQUE", which sets out the essential principles of bank security (branches, customers, employees).
Similarly, it takes into account the new digital technologies that are likely to multiply the threats and risks to this activity, on which the public and private sectors had to increase their level of vigilance.

Thus, thanks to this new cooperation agreement, the "Monaco a safe City" project is now strengthened by the experience, seriousness and expertise of Monaco's banks. It will further strengthen the security of the Monegasque financial sector, which is part of the Principality's attractiveness.