The Budget and Treasury Department, in collaboration with the Digital Services Department launches a new website https://geldefonds.gouv.mc/.

The Secretary General of the Commission de Contrôle des Activités Financières, Magali Vercesi, attended the annual Congress of the International Organisation of Securities Commissions (IOSCO) from 17 to 19 October.

On October 4th, the Secretary of State for Justice addressed the members of the Monegasque Association of Financial Activities during a lunch conference organized by the AMAF. 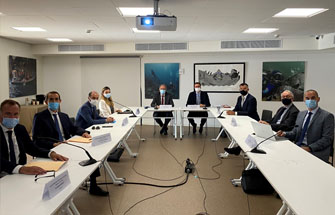 This is what emerges from the interim compliance report of Monaco adopted by GRECO during the meeting held from 20 to 22 September 2010, which was devoted to the 4th evaluation round of the Principality on the prevention of corruption of parliamentarians, judges and prosecutors.

Indeed, in a particularly short time, the Principality has changed its texts in order to meet GRECO's requirements, the latter having underlined the significant progress resulting in particular, for the National Council, from the adoption of its new internal regulations and the appointment of a deontologist and, as far as the Judiciary is concerned, from the reform of the status of the magistracy and the adoption of compendiums of ethical and deontological principles for magistrates.

For the adoption of this report, a Monegasque delegation* was present at the Oceanographic Museum in order to answer questions from GRECO members and to provide any useful information.

The Monegasque authorities expressed their determination to continue their efforts and reflections so that the next progress report, which should be sent to GRECO by 30 September 2022 at the latest, could present further progress. Monaco having authorised its publication, the report is public and accessible on the GRECO website: www.coe.int/fr/web/greco