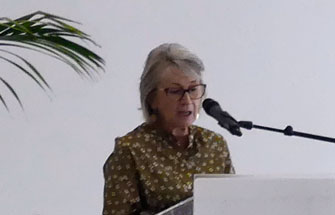 On October 4th, the Secretary of State for Justice addressed the members of the Monegasque Association of Financial Activities during a lunch conference organized by the AMAF.

Mrs. Sylvie PETIT-LECLAIR, after having explained the criminal liability of the banker, presented the instruments of judicial cooperation which the bankers could have to face, in the case of cross-border procedures.

While the obligations imposed on the banking profession are widening over time, the associated sanctions have an inescapable tendency to develop; the responsibility of the banker is most often indirect, but susceptible to criminal qualification. As an illustration of this fact, Mrs. Sylvie PETIT-LECLAIR listed the main offences, including abuse of vulnerability, breach of trust in the misappropriation of client funds, insider trading, corruption offences and money laundering. She emphasized how articles 218-1 and 218-2, recent provisions, provide for and punish the absence of control or supervision that has made possible the commission of the offence of money laundering, and recalled that banking professional secrecy was not opposable to the judicial authorities.

Mrs. Sylvie PETIT-LECLAIR then examined the conventional, textual and practical means allowing the investigators and magistrates to accomplish their mission of judicial cooperation, international mutual assistance in criminal matters being very important in the banking field.