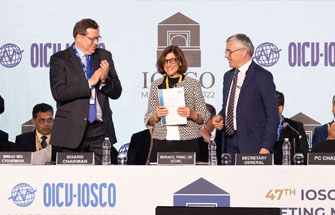 The Secretary General of the Commission de Contrôle des Activités Financières, Magali Vercesi, attended the annual Congress of the International Organisation of Securities Commissions (IOSCO) from 17 to 19 October.

Created in 1983, IOSCO brings together the regulators of the world's main stock exchanges. Its aim is to establish international standards to enhance the efficiency and transparency of financial markets, protect investors and facilitate cooperation between regulators to fight financial crime. Its members regulate over 95% of the world's securities markets in more than 130 jurisdictions.

IOSCO develops, implements and promotes compliance with internationally recognised standards for financial regulation. IOSCO works intensively with the G20 and the Financial Stability Board (FSB) on the global regulatory reform agenda. On the occasion of the annual Congress in Marrakech, the CCAF signed a Multilateral Cooperation Agreement, allowing it to become an ordinary member of IOSCO. Established in 2002, this agreement has enabled regulators to cooperate quickly and effectively to combat cross-border market abuse, including financial fraud and insider trading.

The signing of this agreement is an important step for the Principality of Monaco in the recognition of its status as a cooperative country applying the best international standards in financial matters.