Stéphane VALERI: "The National Council was fully mobilised during the health crisis"

Frédéric Genta: “An industrial revolution of the kind that comes along every 100 years...”

Frédéric Genta, Country Chief Digital Officer for the Principality of Monaco, is transforming the country into a high-performance smart city. Digital technology is now a significant contributor to Monaco’s attractiveness.

An idea behind the tech

Brought up on science fiction, we have often pitted man against machine, but in the world of finance, it is by working together that they produce the best outcomes.

2021, the year of Monaco Sustainable Finance

While 2021 was also hit by the pandemic, Monaco continues to steer a course towards innovative governance while protecting the financial industry and the dynamic nature of the wider Monegasque... 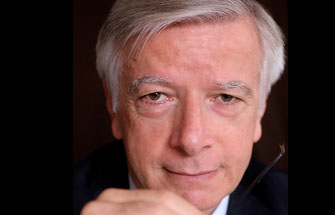 We can modestly say that it was a success insofar as it was the first time we had organised a phygital event. We had already organised 100% digital events with MPL members: the first, in July 2020, was a debate with Professor Muhammad Yunus, 2006 Nobel Peace Prize winner, in the presence of the Government Councillor for the Economy and Finance, Mr Jean Castellini, and Mr Olivier Wenden, Vice-President of the Prince Albert II Foundation. We followed this up by inviting an astronaut, the World President of YPO (Young Presidents' Organization), a major Champagne House... With this little experience, we wanted to focus on Positive Impact in all its dimensions, from philanthropy to the fight against global warming, the social dimension, with the ESG values of Positive Impact.

How is such an event built?

We realised that there was a fabulous potential in terms of themes to be developed but also in terms of speakers. We called on the Principality's honorary consuls across the five continents. Thanks to our direct and indirect contacts, we were able to attract a large number of high-level panelists. We covered all the time zones, with an exercise that started at 7.40 a.m. and ended at 8 p.m., with 23 sessions, 54 speakers, and almost 900 registered participants, because for the first time we opened the MPL network.

To the Princess Grace Foundation network in the United States, to the Prince Albert II of Monaco Foundation network worldwide, to the members of the Yacht Club of Monaco, to the Monaco Ambassadors Club, to the CREM, and also to the YPO, which has 29,000 people in 130 countries. The members of these different institutions or associations had the opportunity to be invited, and that is why we managed to increase the number of strictly and severely selected contacts: 900 registered in total.

The number of real connections is a minimum of 250 people per session. So if you multiply 250 by 23 sessions, you can see that we have exceeded 5,000 physical participations, not estimated ones, this is concrete. In addition, we count several hundred replays between 27 April and today. People are logging on and going to see the sessions they missed that we told them about. The feedback has been extremely positive.

So, an experiment to be repeated?

By repeating this experience - we will obviously do it again - I am not expecting 900 qualified registrants, but at least 2,000. I am extremely convinced that we will succeed without any problem. I mentioned the consuls, clubs and organisations, and I'm also thinking of Stockholm with the SEB bank, which was also able to communicate this invitation to their best clients. If we combine all these strengths and assets, 2000 is a minimum.

A word about the finance-related round tables?

They were clearly the best attended, just as the replays are the strongest. So there is an interest. We need to dig even deeper into the legitimacy of Monaco's claim to green finance, Impact Investing, and the knowledge and expertise of Monaco's professionals in this field. The tone has been set by the Prince himself for years. With the Government taking initiatives in this area, with the Finance Department now aiming to make the reserve fund 100% green within a maximum of two years, we are on a very strong trend.

Yes, with MPL Young Leaders (members are between 16 and 35 years old), there is still a very good card to play. We are communicating Monaco's expertise to young people, our firm belief in preserving biodiversity and combating global warming, but also all ESG values. The MPL Young Leaders is now growing, not in a rapid exponential way, but continuously, with between two and half a dozen new members signing up regularly every week.
In priority it is the children of MPL members, the successors who are going to take over the reins of the big fortunes as well as new young residents in Monaco who are exceptional, such as world-famous Internet youtubers.

You are working with the International University of Monaco on a programme to explain and try to anticipate "post-covid" trends?

Exactly. A programme has been decided for September, before the Monaco Yacht Show, with which we have a special partnership. Over two days, courses orchestrated by the IUM in their premises will focus on how to conceive the exit from the crisis, what lessons to draw from it and how young people can build their own business plan within the framework of their activities. All this through the prism of courses given by extremely experienced professors, supported by interventions of professionals, external experts that the IUM brings together.

The banking sector is very interested in the young target group. Are there links to be built with MPL?

I think so. I would like, for example, to organise a "Summer camp" in Monaco, which could take place in seasons other than summer. It would allow young people to learn about all these notions of inheritance, asset management, investment, how to better invest in the green, how to better invest with impact, how to govern the structures that their parents will bequeath to them. It would be good if we could do this together, by imagining a succession of interviews, experiences, visits, meetings and presentations so that these young people are totally immersed in the Principality. But this could also be done virtually, or both. I am firmly convinced that the card to be played towards young people is fantastic.