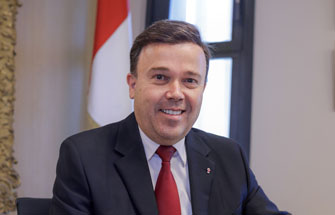 The National Council voted the law of 22/12/20 reinforcing the LCB/FT system, is this part of a support approach for ENR with a MONEYVAL aim?

The law n°1503 of 23 December 2020 reinforcing the mechanism to fight against money laundering, terrorist financing and corruption adapted the Monegasque law to the provisions of the fifth European directive on the fight against money laundering. Obviously, throughout the study of this text, the National Council has endeavoured to ensure that the legislative provisions comply with the applicable European texts, as well as with the recommendations of the Financial Action Task Force on which MONEYVAL bases its evaluations. The National Council's vote is therefore in line with a support approach to ENR.

The National Risk Assessment is a process of regular evaluation of the risks of money laundering that exist within the different sectors of economic activity of a State. In the Principality, this assessment is conducted by the Service d'Information et de Contrôle des Circuits Financiers for the purpose of "identifying, evaluating, understanding and mitigating the risks of money laundering, terrorist financing and proliferation of weapons of mass destruction to which the Principality is exposed".

Adapting without over-transposing, in order to respect the singularity of our Monegasque model, is what we have endeavoured to do during our exchanges with the Government, in order to amend its initial draft law and to make it perfectly in line with the expectations of professionals, but also with the realities of Monaco.

-The law of 11 May 2020 prohibits unfair dismissals and makes teleworking compulsory for certain positions during a pandemic. With a year's hindsight, what were the effects of the law? Has it not been too restrictive for business leaders and banks?

First of all, the National Council was totally mobilised during the health crisis, in the national union of elected representatives and in the unity of the institutions within the Covid-19 Joint Monitoring Committee set up by the Sovereign Prince at the end of March 2020. Within the framework of this committee we have constantly proposed adjustments so that the Government can submit to the Prince the best possible proposals for Monegasques, residents, employees and economic players in the Principality.

This is how, from the first containment, we voted for a law proposal that was quickly returned as a bill, prohibiting abusive dismissals during the health crisis, with a limited period that ended on 18th June 2020. These constraints were therefore very quickly lifted. However, this law was absolutely necessary to avoid unjustified contract terminations, at a time when employees could not find a job given the context. Moreover, it was essential to limit the spread of the virus in the workplace and thus protect employees, but also company managers.

In the banking sector, as OIVs, the establishments have always continued to operate. The implementation of telework, when I was Government Advisor-Minister for Social Affairs, thanks to a renegotiation of the bilateral social security agreement with France, found its full strength in this sector in particular, in spring 2020. Made compulsory to limit travel during periods of high health tension, this telework has accelerated the digital transition, the training of employees, but also the change of habits, towards a more modern and more efficient work organisation.
It must be emphasised that the banking sector and its professional community have shown a remarkable ability to adapt to overcome this difficult period. I would like to congratulate them warmly on this.